Some species of palm trees are more susceptible to illness than others. And in some cases, something can be done after the symptoms of a disease are noticeable. However, these terminal illnesses can only be contained once they’re caught—so you can still save the lives of other nearby simply by contacting the “palm paramedics” at Mainscape. The three biggest threats are: 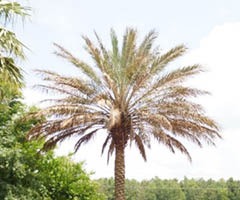 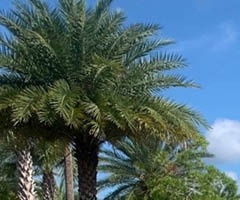 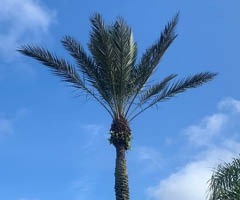 Recently there has been media attention about a palm disease named Lethal Bronzing Disease formerly known as Texas Phoenix Palm Decline (TPPD). This disease is fatal to susceptible palms and has been on the rise lately in Florida over the last few years. It’s transmitted by an insect feeding on plant sap. Symptoms include premature fruit drop and death of flower stalks. Lower fronds turn a bronzish or brown color starting at the leaf tips, progressing upward into the canopy very quickly. It is not uncommon for palms to turn completely brown within a few weeks of initial symptoms.

There is no cure for LBD. Antibiotic trunk injections with oxytetracycline (OTC) every three months can protect healthy palms and may suppress disease if administered in the very early stages. If injections are stopped, palms may develop disease and die. Mainscape recommends quarterly injections on all susceptible palm species mentioned above except sabal palms. Sabal palms are inexpensive palms to replace compared to Sylvester, Medjool and Canary Island date palms. 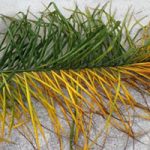 Late-stage leaf symptoms of Fusarium Wilt – palm should be removed

Fatal to: Queen and Mexican Fan (aka Washington) palms

Early symptoms will show chlorotic (splotchy) or more often brown discoloration on one side of the frond. These symptoms will start on the oldest (lowest) leaves and move up the canopy. Fusarium Wilt is thought to be spread by wind-blown spores and possibly birds or insects. Petiole (rachis) blight has similar leaf symptoms and can be confused with Fusarium Wilt. Petiole blight, however, seldom kills palm trees. Fusarium Wilt disease may also be transmitted from contaminated pruning equipment. Mainscape disinfects all pruning equipment quite often and we will not prune any infected trees to prevent the spread from tree to tree.

There is no preventative or cure for Fusarium Wilt. Infected trees should be removed as quickly as possible to prevent the spread of this disease to adjacent trees. It is not recommended to plant another palm susceptible to Fusarium Wilt back at a site where a palm has died from this disease. Instead, plant another palm such as Foxtail, Christmas or Alexander if a palm is desired in the same location. These palm species are not susceptible to Fusarium Wilt. 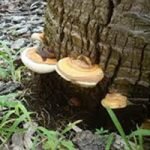 Conk present on the base of the trunk

Known to kill: All palms!

The Ganoderma fungus is spread by spores from conks on the lower part of the trunk, usually four to five feet from the base. The spores become incorporated into the soil and then grow over the palm roots. The fungus does not rot the roots, but uses them to invade the trunk tissue. Ganoderma cannot be spread by pruning equipment since the fungus is not associated with the leaves. Once a conk is observed on the trunk, it should be removed immediately to prevent the spread of the spores. The palm should also be removed as well since conks indicate a significant portion of the trunk is already decayed and could fall over from heavy winds, especially in a hurricane.

There is no preventative or cure for Ganoderma Butt Rot. If a conk is not produced and the palm dies, cross-cutting the trunk during removal is the recommended “autopsy” to determine if palm was compromised due to Ganoderma. Do not plant another palm in the same area afflicted by this disease as it resides in the soil for multiple years. Instead, replace the deceased palm with an ornamental shrub or tree.

If you are unaware of what species of palms you have on your property, your Mainscape team would be happy to identify them for you. Send us a customer service request.